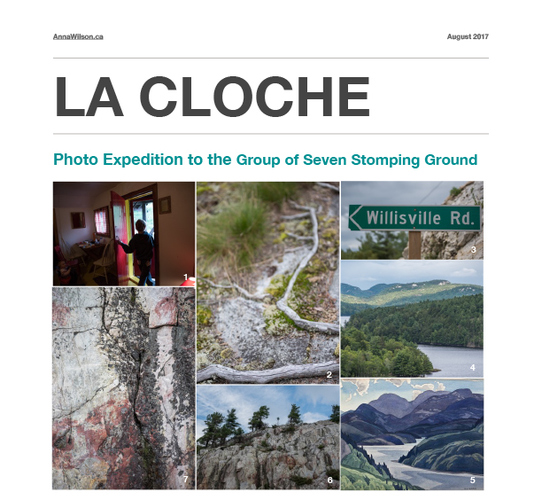 
I have always been inspired by the work of the Group of Seven. To end off this summer with an adventure, I decided to travel with my family to photograph the landscapes featured in a large number of works by many of the artists including Casson, Carmichael, and Jackson. I headed for the La Cloche region, the Western gateway to Killarney Park backcountry. To keep the experience authentic, I managed to book a cabin, which Casson used to rent on his painting trips in the area. With my camera in hand, I canoed the La Cloche lakes and climbed the Willisville Hill, views from which were featured in a remarkable number of their paintings.

One evening, flipping through a borrowed  copy of Jim and Sue Waddington’s “In the Footsteps of the Group of Seven” and reviewing my images from the previous days, I was surprised to find that I had captured many views with strikingly similar compositions to those in the Group of Seven paintings. I too, was in awe of the white capped mountains and dramatic light characteristic of the area. In keeping with my artistic process, I engaged mindfully with my surroundings and examined the details from various perspectives, in addition to the grand vistas.
I found myself captivated by the dazzling variety of lycheen covered rock with bent trees and moss clinging to bare stone. The patterns reminded me of intricate abstract paintings.  As in my earlier bodies of work, I experimented with abstraction v.s. realism by including scale references in my photographs, such as insects and plants, to challenge the viewer’s perception. To reinforce the painterly feel of the images, I compressed perspective and used a shallow depth of field to create out of focus areas that remind me of paint strokes and play with depth perception.

The resulting series of images examines the La Cloche landscape from a new perspective, while paying homage to the masters that inspired me to engage with it


8. Frood Lake, near Carmichael’s Cottage, 9.“La Cloche Panorama” by Carmichael from Willisville Hill, 10. Detail from Charlton Lake, 11. A selection of images from the La Cloche series 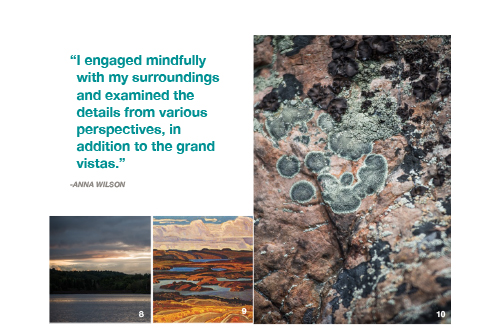